I knew it was going to be a long day the moment I woke up the morning of my birthday. It was supposed to be a day of expected gaiety, except in my case, it was an emotional roller coaster ride. I was already feeling entirely under the weather after a huge fight I had with he-who-must-not-be-named, and it has affected me significantly that my emotional torment manifested itself physically. Anyway, wanting to start the day right, I woke up at 6am despite the cough and colds so I could go to church and find a moment of solemnity.

After mass and skipping to another series of unfortunate events, my sister and two of my cousins invited me to celebrate my day and eat lunch at Korean Garden Restaurant located at Bin Mahmoud here at Doha. Since it was our second time there, most of our orders are similar from last time, with the addition of shrimp tempura and upgrading our previous order of regular sashimi to special.

After a sumptuous meal, pictures and thank yous, my sister and one of my cousins went home while I decided to go with my other cousin, Mhel, to Landmark mall where she works. It was there when I thought of buying myself a gift and I this is what I bought. 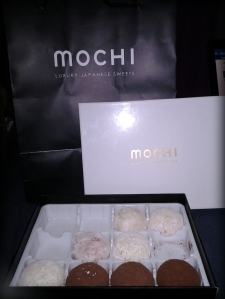 It was 3:30pm and still too early to go home and since the Cinema at Landmark mall doesn’t have exciting movies to watch I decided to go to Villagio Mall instead. And there I watched the movie Beautiful Creatures (I’ll probably tell you my thoughts about this movie later on).

I was also able to get free strawberry shake (SASSY) from D’Lush care of a good friend — too bad I wasn’t able to take a picture. Oh well, after the movie, which ended at 9pm, I went back to Landmark Mall and waited until the end of my cousins shift. We went home together at 11:20pm. Ate some of my bought mochi and slept at 1am.

So, fellas, that was how I celebrated my birthday. Lots of tears spilled and money splurged. My most memorable yet. I wonder what next year would be like? >_<