Since Samsung’s Galaxy S3 was first introduced, I was pretty confident I will buy one. It was sleek and stylish. The fact that it was bigger than the norm didn’t deter me. In fact, I loved it! For me the size was perfect both as a mobile phone and as a browsing tool whenever I like to Google something or check on my Facebook and all things related. However, as most of the things happening in my life right now, things don’t exactly turn the way I want it to be.

Before I plan on buying Galaxy S3, I was using a Pink Samsung Corby GT-B3410W. And it has been my phone for almost 3 years until water found its way in the insides of my poor, pink mobile phone.

So because I cannot use my Corby any longer, it seemed to me that I’ll be buying my own S3 soon. Or is it?

Well it didn’t happen. Why? I have been sales talked! By Janel!

You see aside from me buying an S3, I also plan to buy an Apple Itouch which I’ve blogged about last time and which you will find HERE.

So what does Apple Itouch had to do with my change of plans? Well according to Janel, why do I need to buy both Itouch and S3 when they mostly have the same purpose? It’s either I buy the S3 alone or buy both Apple Itouch and Blackberry. Why Blackberry? Because it is a great  outside-wifi-range phone and perfect for communication due to its BBM feature. The Itouch would be for my applications while the Blackberry would be for my communication. If I buy an S3 and an Itouch, aside from being the other being a phone , they would both be useless without wifi. And because of that logic… I was sold! And now I own my first Blackberry.

Again, I originally wanted the Blackberry Bold 9900 but due to short funds I opted to buy the 9790. It is both touch and text like the 9900 so it was okay with me. Plus it fits right into my hand very nicely. 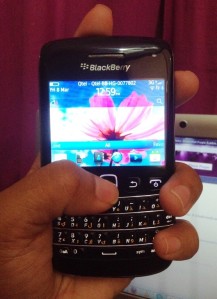