New Year’s Eve is one of my favorite holiday second to Christmas. Mainly due to the stunning fireworks display you see during this time and the blaring sound from the television as we watch the exciting countdown to the New Year. Of course, such an experience happens when I’m home in the Philippines, and for 6 years now, I have not been home during the holidays.

In my previous “L’Occitane” post, I’ve mentioned that my father will be home to celebrate Christmas and New Year with the family, leaving me all by lonesome self during the holidays. (Ok, not entirely alone since I have friends and my Beau is still here, but you get the gist of it.) Seeing as there won’t be an actual celebration at my place here in Doha, I’ve decided to have a bit of an exceptional dining experience with Beau on New Year’s Eve, and we chose to try the Italian Restaurant, Carisma.

Carisma Restaurant is an Italian restaurant located on the first floor of Warwick Doha Hotel. It is basically next to the lobby and very easy to spot.

Given that it’s New Year’s Eve, the Menu was not the usual. There is already a set of food choices prepared for a full-course meal, and all you had to do is pick between two options of appetizers, entrée, etc. The full-course meal, including drinks, is worth 199 QAR per person.

As always, I feel like clubbing myself for not taking a photo of the Menu. This must be one of the reasons why I won’t be an effective food blogger (especially one that does restaurant reviews). I simply forget to take the required pictures. Ha!

Anyway, I was looking forward to trying their pizza beforehand, but seeing that there was no pizza in the Menu, my beau and I asked if it’s possible to just order one full course meal for only one person plus one order of Pizza Carisma (even if it’s not on the night’s menu). The staff was very kind to accommodate us with the request.

So here are photos (and some appraisals) of our dinner.

The meal started with this focaccia bread. It was an excellent start to the meal and actually feels light even after finishing 3 of them. 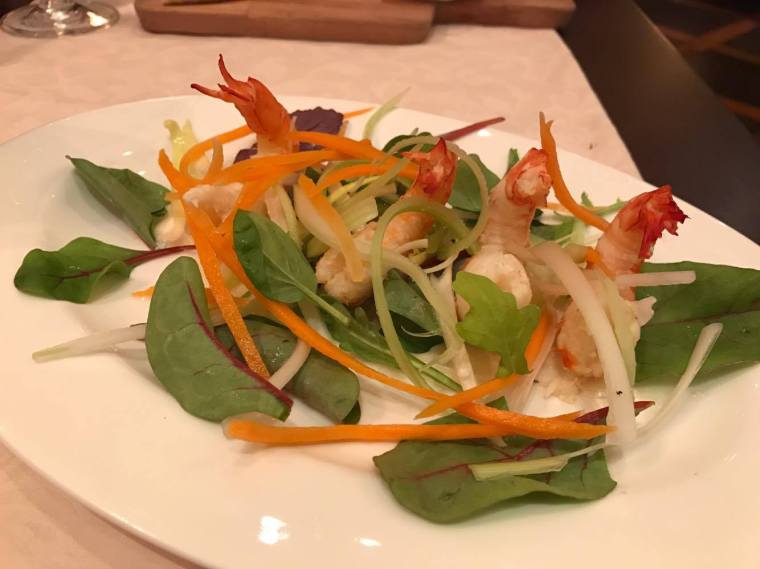 This one I am calling the shrimp salad since I have no idea what it was called on the menu. The shrimp in itself isn’t exactly packed with flavor, but the overall dish has that slight sweetness and zesty taste to it, which makes it delicious.

I was a bit disappointed with the Risotto, we didn’t like it very much, and is the only dish we weren’t able to finish. I guess this type of risotto just wasn’t my taste.

I’m afraid to say that by the time we had the beef tenderloin we were so full we thought we’d explode. Ha! Anyway, I can’t accurately judge the taste of it, all I know is that it wasn’t as juicy as I wanted or expected it to be while I was cutting it in half.

This dessert was beautiful and festive-looking. However, I’m not jumping up and down for it. For me, it was a good enough dessert that balances out the taste of everything we’ve eaten that night. It wasn’t too sweet, which was good, but for some reason, I felt something lacking with it that I’m not sure of. Anyway, we still enjoyed it. 😀

The pizza was served together with the risotto, which we were thankful for after realizing that we didn’t like the risotto very much. The pizza was slightly thin crust and tasty without overpowering sauce or toppings.

So that ends our New Year’s Eve dinner! Believe when I say that we were so full we ended up sleeping straight away right after the clock strikes 12.

Oh! Before I forget, the kind and very attentive staff gave us these…